I’m here to talk about MMA’s most intense rivalries. Catering to the casual fight fan first, I’ll start with the most obvious one. (I know it’s not fair to you hardcore fans, but no one cares about you. We know that you will tune in no matter what. I still appreciate you, you obsessed lunatics, so just stay tuned.)

Chael recently received his PHD in the art of trash-talking (TT), and was also the valedictorian of his class. He took TT to new heights. His words ripped not only through his adversaries intestines, but the intestines of his counterpart’s entire country. Trust me though, this brilliant TT’er has an outrageous yet adept plan to convert the hate of some of those countrymen to love and acceptance. Yes, I have inside info…but no, I won’t spoil Chael’s next scheme. Take it from me, “You’ll see what’s up Chael’s sleeve!”

If Chael was valedictorian of his class, then Anderson was the class buffoon. Anderson’s knowledge of the English language quickly evaporates when it’s his turn to retort to some of Chael’s verbal onslaught. This rivalry has had the most one-sided trashtalking in the history of the sport. When it comes to slanging rhetoric, is Anderson worse than Joe Frazier was against the great Ali? I’d enthusiastically say so. I’d also have to say that Chael would be able to hang with “The Greatest” when it came to sparring with verbs. Even in his native tongue, Anderson fails to even so much as hold Chael’s jockstrap. Landslide victory for Chael in this event. And for those of you that say talking trash doesn’t do shit, I beg to differ. It has increased my anxiousness ten fold in anticipation of seeing this “rivalry” settled with extreme violence.

Mixed martial arts is a grappling-centric sport, with wrestling and Brazilian Jiu Jitsu reigning as the dominant forces. So it’s only natural that a rivalry would arise as to which style is the premiere base for MMA. As with all rivalries, the goal is to establish dominion. It doesn’t matter if it’s the two trashiest girls in school battling over who’s queen slut, the two toughest kids on the block fighting over who’s king shit, or more public feuds – such as McDonald’s vs. Burger King slugging it out over whose disgusting food can cause more cases of diabetes and heart disease. In a rivalry, someone’s got to lose. 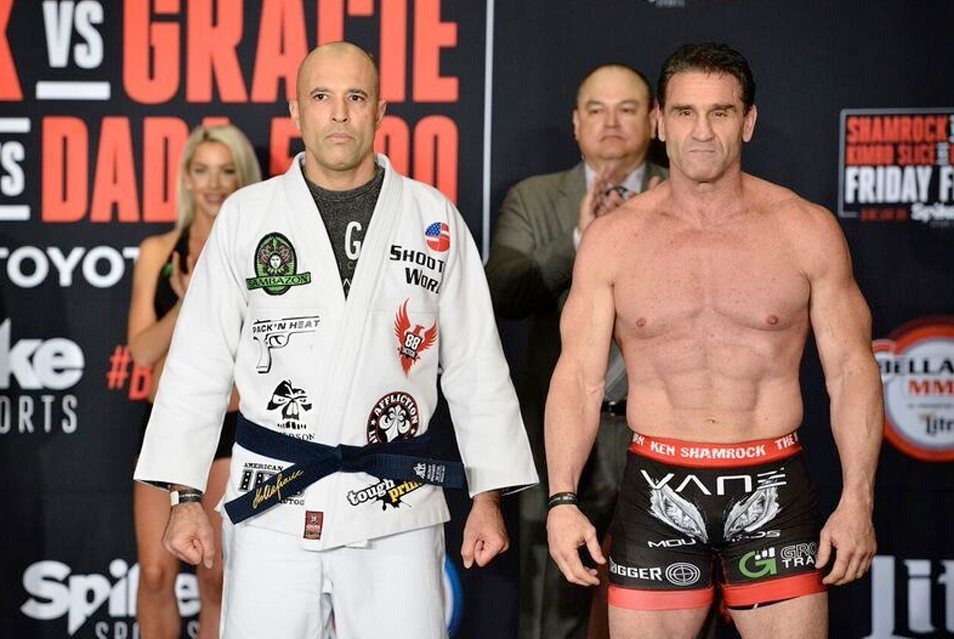 The wrestling vs. BJJ rivalry is no different.

BJJ was without question the first dominant martial art in MMA. Royce Gracie opened up a can of chute burro on the martial arts world. He tapped out eleven dudes in a row to win the tournaments at UFCs 1, 2, and 4. He didn’t even have the decency to offer his conquests the choice between jelly and syrup. He just came in and established himself as the Triple OG. It took a few years for guys to catch on, but eventually, it got to the point where a fighter could play the ground game with a BJJ pimp and not head home that night minus a limb. It wasn’t advisable — still isn’t, but it’s doable. Look to UFC 5, where Ken Shamrock took Royce Gracie down and laid on top of him for 36 agonizing minutes. He did less in the prone position than the girl who’s aptly known around my neighborhood as “Stump,” and the UFC’s first “superfight” was a horrifying spectacle, but it showed that a wrestler could survive a BJJ guy’s guard with a little knowledge of how to defend submissions.

What started as an opportunistic endeavor to introduce Gracie Jiu Jitsu to America spiraled into the evolutionary beast we know as modern MMA. Enter wrestlus dominus onto the scene — a particularly gruesome species with a nasty disposition and real fucked up ears. Gnarled appearance notwithstanding, the ability to dictate where a fight takes place is the wrestler’s greatest gift. It’s that ability that makes wrestling a dominant base. And the benefits for the sport have been amazing. Both styles have brought out the best in one another. Would Jose Aldo be the dominant champion he is had he never developed his stellar takedown defense? Would Ben Henderson still have a head to grow his gigantic hairdo on if he didn’t learn how to escape from a sickeningly deep choke? Just as homo erectus was forced by necessity to construct more advanced tools and weapons to have a fighting chance against the ungodly creatures that existed back then, fighters too were forced to evolve, and wrestling and BJJ were at the forefront of that expansion.

But what makes wrestling the dominant base is how the fights are judged. With few exceptions, the guy in top position wins the fight, even if he’s not doing much. That may suck to those of us who love an active guard, but the scoring system is what it is. So in my most humble opinion, and with tremendous regard and respect for BJJ, wrestling must be given the edge in this rivalry. And if you don’t like it, I cordially invite you to suckle on my bountiful gluteus.

It’s fitting that Stephan Bonnar is our guest this week. Odds are pretty high that if you’re reading this article, you became an MMA fan after watching the first season of The Ultimate Fighter. And while Bonnar’s classic battle against Forrest Griffin may have sparked your interest in the sport, Chuck Liddell’s rivalry with Randy Couture is what made you stay.

Not only were the two UFC Hall of Famers in the primes of their careers for this rivalry, but they were two of the most popular, charismatic fighters in the sport. When UFC 52 shattered live gate and PPV buy records, it wasn’t exactly because of Lindland vs. Lutter. It was entirely because of all the new fans who wanted to see Chuck Liddell fight Randy Couture. And just in case you don’t believe it, their third and final bout at UFC 57 — which featured Brandon Vera vs. Justin Eilers as the co-main event, mind you — shattered those records yet again.

This is the rivalry that made it cool to tell your friends that you liked MMA. These are the athletes that virtually every fan since has listed among their favorite fighters. This is what brought MMA into the mainstream and kept it there — what more is there to say?