When I was told the subject for this round table, I thought I’d have to pass on it, simply because on first reflection I couldn’t think of any fighters that I was a fan of, but then went off completely, or vice versa. But then I did something I try, as often as possible, not to do…I used my brain. After this painful but mercifully brief process was over, I remembered a couple of fighters hidden deep in my grey matter that did fit this description. So here’s what I dug up.

Before I get into this, please don’t mistake a dislike for a person — or in this case a fighter’s character — for his skill in the ring. A fighter can have a few character flaws and be a great fighter or vice versa. Now, some people might say it doesn’t matter about what the fighter does on the outside of the cage; it’s all about what happens inside. This is true to an extent but, come on, MMA fans, for the most part, aren’t mindless robots. You are always going to want to root for the fighter that you can relate to and like as a person… 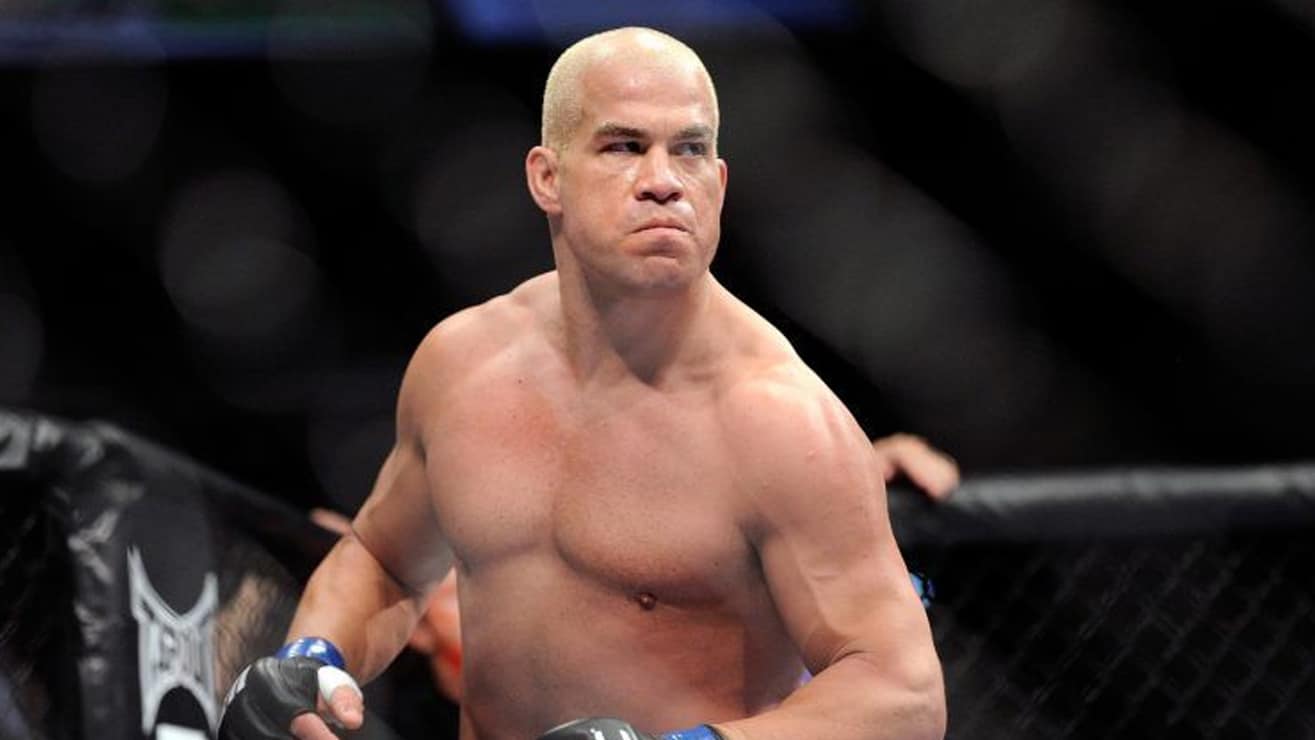 Now, the reason Tito didn’t jump to mind straight away was because I haven’t been a fan of his for such a long time. Before I go on to make it clear why I feel this way, I must say I’ve never met him. He might be the greatest guy in the world for all I know but the reasons I’m no longer a fan of his is from things I’ve gleaned in interviews and situations I’ve see on TV and interviews over the years.

When I look back to when I first started watching Tito fight in the UFC, I was definitely a fan. I mean how could you not be? I loved his fighting style, his GNP was great to watch and back then most of his opponents didn’t have an answer to it. Even the grave digger routine he did after fighting, which some deemed disrespectful, I thought was a good trademark that helped ‘brand’ him and it got him noticed and helped make him popular.

So, it begs the question, ‘where, for me, did it go wrong’? I started to go off Tito, a little when he would list a catalog of injuries that he had to fight off to be in the cage that night. It’s not that I didn’t believe him it’s just, I believe, if you make the decision to fight, injury or not, you’re doing it because you think you’ll win.

That being said, I can forgive Tito for going on about his injuries because, as a fighter, I realize that sometimes you need an excuse to fall back on and make the loss that much easier to swallow, so you can get over it and get back in there should it all go wrong this time. What really did it for me was when I heard him commenting on an Affliction show. It wasn’t so much the mistakes he was making in his commentary, as while these were cringe-worthy they were also really funny. What wasn’t funny though was when Vitor Belfort KO’d Matt Lindland with a devastating left hook, and Tito started laughing and then started singing “goodnight sweetheart.” Not only was this not funny but, as a fighter himself, he should have known better than to take the piss out of a fellow fighter that got caught. I mean, come on, it’s not like it’s never happened to him!

Another reason he lost me as a fan was that I didn’t like it when Joe Rogan was interviewing Marc Coleman, after his loss to Shogun, and Tito was shouting abuse at Coleman during Joe Rogan’s interview with him. This was because Tito was trying to reignite a fight that was supposed to have happened before Coleman tore his MCL, because he thought he could get an easy win off Coleman like he did with Ken Shamrock as Coleman, in Tito’s eyes, was now past his best. I don’t have any respect for that.
I’m going to stop there as I don’t want to fighter bash and for all Tito’s faults, he has been at the top of a big heap for a long time and provided entertainment to a lot of MMA fans along the way. I now see him a bit like one of those troublesome uncles you see at weddings, that has had far too much to drink and causes trouble by trying to shag a bridesmaid.

Fighter I didn’t like than ended up being a fan of.

I found this a lot harder, as most of the time it’s pretty clear cut whether you’re a fan of a particular fighter or not. Then I remembered Dave Legeno. If you don’t remember Dave, let me refresh your memory. He came into MMA with little to no experience of the sport, but being an actor by trade he was always able put on a ‘show’. I remember seeing him in Cage Rage doing an entertaining monologue then, as the camera panned, he screamed & he was holding a severed Japanese head aloft. All very WWE, which isn’t my issue, my issue was it didn’t seem like he had much to back up any of these antics and he seemed like he was just ‘all show’.

He lost the fight that night, by Achilles lock, to Minowaman who was, coincidently, Oriental. [Ed. note: He means “Asian.”] That was Dave Legeno’s second loss in two fights after he suffered a brutal KO loss to Mark Epstein.

I thought Dave was going to take his acting ability and Oriental severed head off into the distance to try his hand at something else. [Ed. note: He means “Asian severed head.”] But this didn’t happen.

Dave picked himself up to then go on and win his next four fights, before calling it a day and giving acting another go, where he’s had a lot of success in films like ‘44 Inch Chest‘ , ‘Snatch’ and ‘Harry Potter’ to name just a few.

Now, I know first-hand how hard it is to pick yourself up from a KO loss and try again, never mind if you had lost all three of the only fights you’ve ever had. But that he did and he picked himself up well and in the process turned me into a fan. Fair play, Dave. 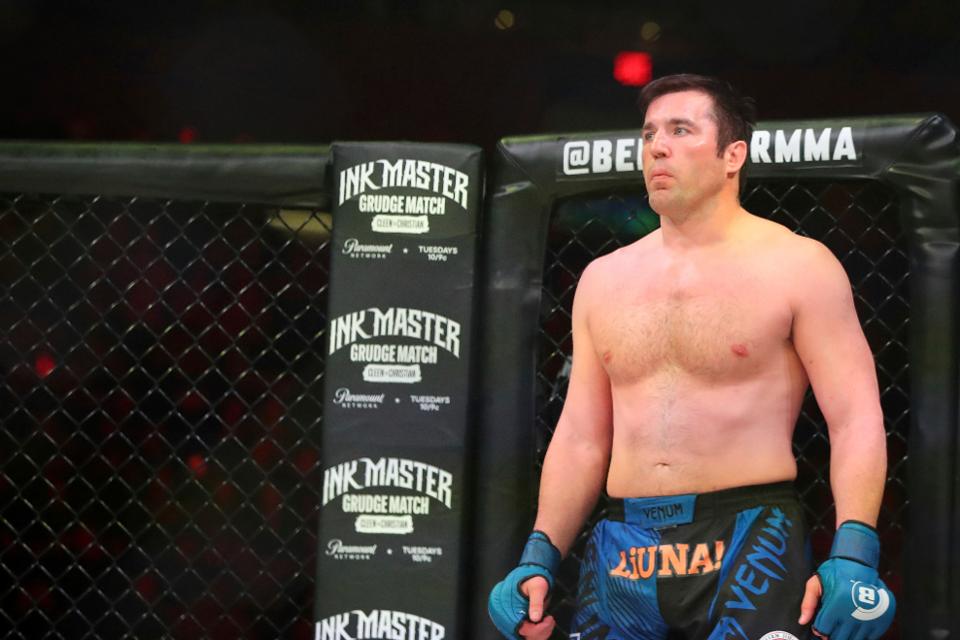 This dichotomous set of feelings wasn’t always so. At first, I just hated him. Not because of anything he’d really done, you see, but because of what he wasn’t doing. He wasn’t entertaining me. And my opinion of the dude, who was obviously a very skilled and very capable wrestler, was formed long before he ever set foot in the Octagon.

Way back in September 2003, the International Fighting Championship had a badass one-night eight-man tournament in Denver, CO, featuring the likes of Jeremy Horn, Renato “Babalu” Sobral, Mauricio “Shogun” Rua — the works. And who got triangle choked by Forrest Griffin in a quarterfinal bout on that card? Sonnen, of course. Sonnen, who seemed to be of the mold of wrestlers who’d lay on opponents like a human down comforter, riding out the clock or, thankfully, getting caught in a submission somewhere along the way.

I was ringside when Sonnen put forth a pedestrian performance against the Russian Arman Gambarayan at a promotion called the Mixed Fighting Championship, and though he won a follow-up bout in the organization via first-round TKO, he was still pretty much a blanket. Sonnen went on to compete in the Octagon — which should be an indication of progress — but he crapped the bed, taking an uninspired decision against Trevor Prangley and tapping to Babalu and Horn. Again, I was ringside when he stopped Amar Suloev at a BodogFIGHT show, but honestly, the most memorable thing about that fight was how much Suloev grabbed the ropes. Even Sonnen’s run in the WEC was forgettable.  Remember when he took on champ Paulo Filho for the belt? The story of that bout was Filho acting like a lunatic, not Sonnen kicking any degree of ass. It got to the point that, when I knew a Sonnen fight was about to grace my television screen, I’d go to the kitchen and make another batch of popcorn. Or I’d go take a dump. Anything was better than watching him in “action”.

And then the improbable happened. At UFC 104, Sonnen beat the ever-loving snot out of Yushin Okami, and at UFC 109 he prison-raped Nate Marquardt, and when he spoke…it was as if the heavens had opened up, and the ghost of every dead pro wrestler began channeling their collective energies into this formerly unworthy earthly vessel. Suddenly, Sonnen was interesting. I was entertained.

For sure, it helped that Sonnen was inexplicably very, very good at beating the piss out of dudes — which he did for about four and a half rounds against the heretofore untouchable Anderson Silva.  But there have always been fighters in the cage who possessed great ability yet had the personality of a discarded dildo. Sonnen, somehow, someway, came to have both the gift of fighting and gabbing in spades, and he wielded them in expert fashion. Yeah, it was interesting how he nearly beat Silva, but that interest has increased a thousand-fold because Sonnen’s mouth had written checks that he was very nearly able to cash.

Ain’t nothing but a thing when it comes to Sonnen, who went from a boring, no-potential fighter whom I hated, to the most interesting man in the world, and a fighter I love.

I am going to be completely fair and honest with the CP brethren. I am a notoriously meticulous individual who can hold a grudge like nobody’s business. Basically, I am not the easiest dickhead to get along with and once you cross me, no matter how trivial or juvenile the slight might be, you have made the list. I don’t easily change my mind to fondness once I view an individual as untrustworthy. Because I am such a judgmental prick, I found it extremely difficult to think of a fighter that swayed me from disdain towards affection and before I spontaneously combusted, I opted to discuss a fighter that I used to be partial to but he has since fallen out of my (and I am sure most of the CP community’s) good graces.

Royce Gracie may have been the first star to come out of the UFC but Ken Shamrock was the one who had the appearance of a star. Shamrock was multidimensional because he could strike as well as submit his foes and I quickly jumped on the Shamrock band-wagon back in 1993.

His list of MMA opponents is like a who’s who of the sport that includes names like Bas Rutten, Maurice Smith, Dan Severn, Oleg Taktarov, Kimo Leopoldo, Don Frye, Tito Ortiz, Kazushi Sakuraba and Rich Franklin. Although he did not win against all of these icons, a laundry list like that has to make you say, “Holy shit!” Shamrock then took a hiatus (1997-1999) from MMA to make some easy money testing his skills in the WWF (yes – it still had the “F” back then). Though I wanted him to continue with legitimate fighting, the move did not necessarily bother me because I would much rather pretend to get hit in the face than actually get hit in the face, especially if it was lucrative. Kenny used the moniker “The Worlds Most Dangerous Man” and although I didn’t know it then, it was the beginning of the end with my affinity for Shamrock.