One of the reasons we love the sport of MMA is the absolute reality that a fight can end in the blink of an eye. We have all held off taking a leak or grabbing another beer until the end of a round because we all know that in the 30-90 seconds that we step away from the screen, the fight could be over. It has happened to all of us. You figure the last minute of the round is going to be uneventful just like the four minutes prior. You get up to snag another High Life and then you hear the collective “OOOOOHHHHHHHHH SHIIIIIIIIIIIIIIIIIIIIIIIIIIIIIT!!!!!!!!!!!!!!” from the roomful of friends that have gathered in your man-cave garage to watch the latest UFC.

So I ask: How could it get better? Answer: By adding another way to win a fight in the blink of an eye, that is more painful than a Paul Harris ankle lock and more powerful than a 2005 Iceman overhand right. 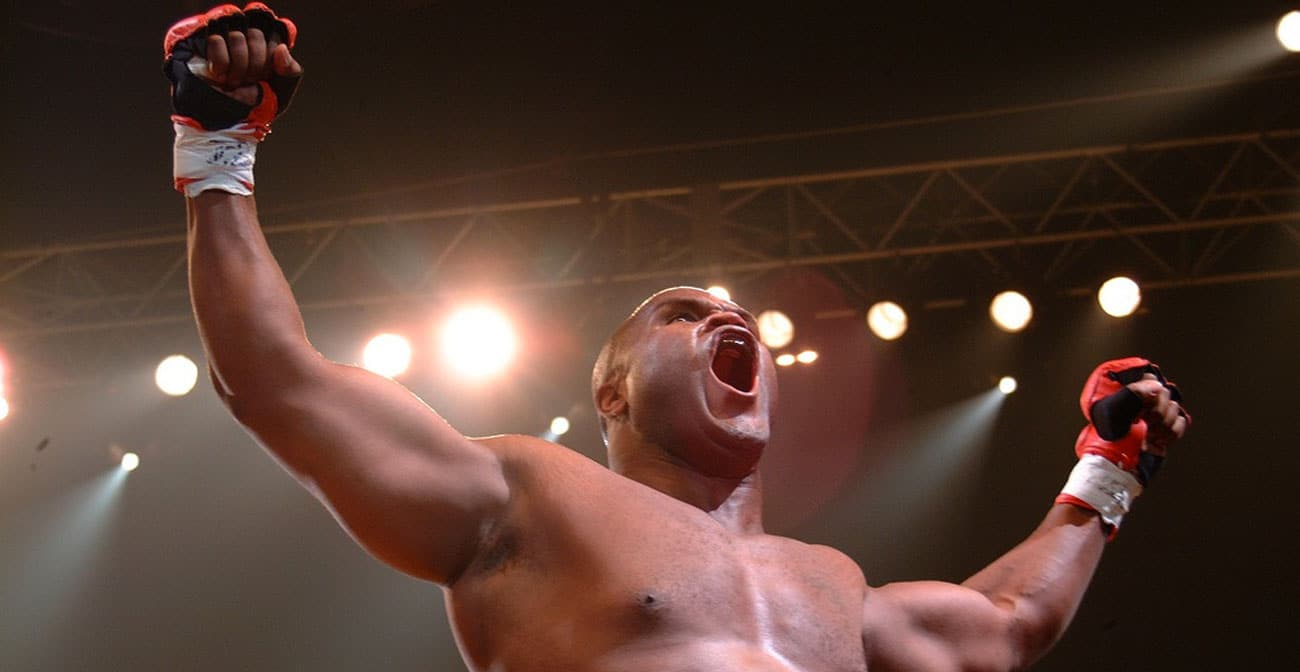 I would change the rule that states that it is illegal to “intentionally throw your opponent out of the cage/ring.” Now let me preface this by saying it has to be a cage because pushing somebody over the top rope is for guys like Brock and Hillbilly Jim. Not only would I make chucking your opponent out of the Octagon legal, but I would also propose that you automatically win if you are able to successfully achieve that feat.

I understand why this rule was implemented back in the stone ages of MMA: A) Because of the “open weight” format where dudes were typically outweighed by 50 to 500 lbs (see Keith Hackney vs. Emanuel Yarborough @ UFC 3), and B) because there were huge dudes with little to no training that were just plain batshit crazy (see Scott Ferrozzo @ UFC 8, 11 & 12).

Tank Abbott actually tried it back in 1996 at Ultimate Ultimate when the scrappy Cal Worsham was actually getting the better of the stand-up action during the opening seconds of their quarterfinal bout. Once Tank was able to get a hold of Worsham, he picked him up over his head and literally tried to heave him into the 3rd row of Birmingham, Alabama mouth-breathers in what appeared to be a bingo hall. But alas, Worsham held on to Tank’s head and the potential for the most awesome highlight in MMA history was thwarted.

Now that there are weight classes and the two fighters are at least similar in size — unless your opponent is Anthony Johnson — the feasibility of a guy actually heaving another man out of the cage has all but disappeared. (Though you can tell that Matt Hughes’s mind was heading in that direction against Carlos Newton.) So if it is damn near impossible to actually pull off, why not abolish the rule and give the fighters and the audience one more option for potential fireworks? We live for the “Holy Shit” moments of MMA, and what could possibly compare to a title changing hands when the champion is muscled overhead and Frisbee-d out of the Octagon?

I’m sure the rule will never change and even if it did, it’s hard to see it ever being put to use. But what if…what if?

You would have to watch every UFC wearing an adult diaper with a full cooler beside you because you would never get up during a fight ever again.


If I could change one thing about the Unified Rules, it would be to get rid of the senseless “12 to 6″ elbow rule. The strike is no more damaging than one from another angle and it’s hard to officiate consistently, so what’s the argument for having such a rule?

Long, long ago (UFC 8), Gary “Big Daddy” Goodridge murdered a poor, gentle soul named Paul Herrera with a succession of elbows so terrifyingly violent that white people everywhere shut the fuck up about rap music and started being afraid of ultimate fighting. Herrera had tried a fireman’s carry, but wound up trapped in a Goodridge crucifix that surprised everyone involved. Goodridge paused a moment before unleashing a string of twelve billion of the angriest elbow strikes you’ve ever seen in the space of four seconds, scrambling Herrera’s emotional cortex and his ability to roll his Rs (a fate worse than death for a guy named “Herrera”).

Perhaps the best argument against the rule is that I’m still not quite sure what exactly is the wrong way to elbow somebody: Is it literally “ceiling to floor”, meaning an elbow is illegal if it follows the path of gravity straight down? Or is it 12-6 relative to the fighter throwing the elbow — from head to toes? Even watching fighters get warned or disqualified doesn’t help; it seems referees themselves don’t agree on how this rule should be interpreted.

Do we really need a rule so arbitrary, so capricious? No. So yeah, I’d definitely 86 the 12-6 elbow rule if I could change the Unified Rules.

“The use of abusive language in the fighting area”

There are so many things to love about talking shit, but one of my favorite aspects of this unheralded art is the way it hurts people’s feelings.

I realize that MMA is a sport, not a soap opera, and that at the end of the day the most important factor in a fight is the skill of the combatants involved in the scrap, but all things being equal I’ll take a side of animosity to go with my ground-and-pound.

Why they ever forebade in-cage smack talk is beyond me. We’ve refined and restricted the act of fighting into a neatly packaged spectator sport, but when you boil things down there’s still a lot of emotion that goes into a fist fight. Don’t get me wrong, I enjoy the professional demeanor of your GSP’s and Couture’s, but if I have to choose between 15 minutes of bowing and bro-hugs or watching two rabid, snarling fighters baring their teeth, I’m going with the dog fight all day.


I’ve had it up to my eyeballs with the preferential treatment wrestlers receive in the sport of MMA. Not only are takedowns ranked next to Godliness as far as the judging criteria goes, but these sons of bitches are completely protected from a maneuver that is nothing short of dog shit in the real world. I’m talking about dropping to your knee, people. Sexual connotations aside, dropping to your knee or knees gets you killed in the streets, and the fact that wrestlers are allowed to use this flaw in the rules as a means for stalling fight after fight drives me fucking bananas. If a fighter has the fear of getting kneed into oblivion by his opponent while attempting their billionth sloppy takedown, then perhaps he would be a little more hesitant to essentially take the fight out of fighting. Hell, we might even see guys like Jon Fitch and Jake Shields try to engage on the feet, but perhaps I’m getting ahead of myself.

Don’t get me wrong, I appreciate the grappling aspect of MMA as much as the next guy, unless the next guy is Melvin Guillard of course, but this “no knees to a downed opponent” nonsense is about as blatant a case of nepotism in the MMA rule book as I have ever seen. If fighters were allowed to knee the head of a downed opponent, matches like Munoz/Okami, Hughes/Serra, and Brookins/Koch would have played out a lot differently. Mainly, they wouldn’t have sucked ass.

It’s as simple as this; mixed martial arts competition, at least in my opinion, is supposed to be held on a level playing field. Each form of fighting has its upsides and its pitfalls, which is why a given fighter must have more than one tool in his arsenal if he is to succeed in the sport nowadays. And allowing wrestlers to shoot for a takedown from halfway across the cage then intentionally hit the deck with no fear of a counter-attack inherently destroys that concept. Imagine not being able to punch Rousimar Palhares while he was diving for a life-shattering leglock, and you’d begin to understand how bullshit this rule is.

“No knees to a downed opponent” puts forth the notion that a given fighter doesn’t need to have even half-decent standup as long as they can hug their opponent for three rounds and take home a decision based on some warped idea of “octagon control.” Tito Ortiz will tell you the downside of having shit standup, and if that isn’t proof enough, just rewatch the TUF 15 preliminary fight between James Vick and Dakota Cochrane and tell me that that fight wouldn’t have ended within the first minute if Vick was allowed to throw some knees. The fear of God back needs to be put into these takedown artists, these lay-n-prayers, and these flip-floppers once and for all, and there’s only one way to do it. 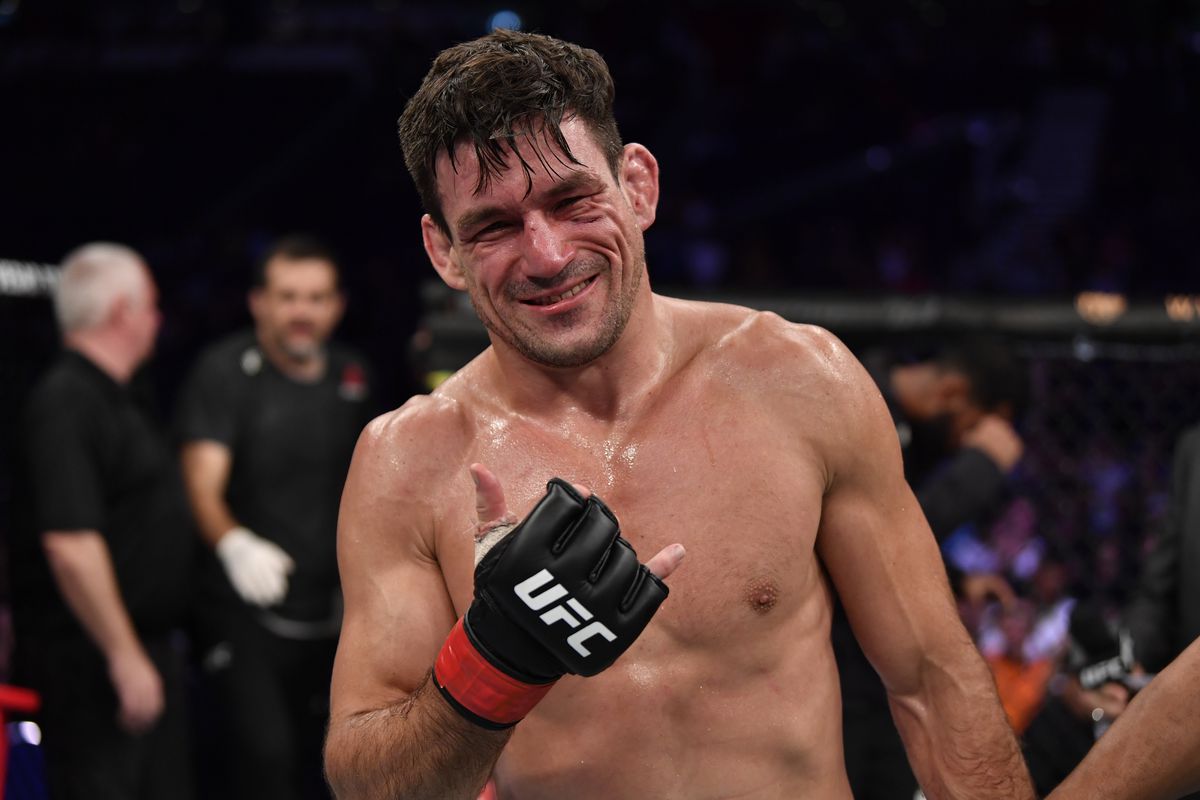 As much as I appreciate Jared’s dream to turn every UFC fight into a grisly re-creation of Arona vs. Sakuraba, I think it makes more sense to simply re-define what “grounded” means in MMA. There’s something very un-sporting — and really freakin’ dangerous — about soccer-kicking or kneeing a man in the head when he’s down, and I have no problem with that remaining illegal. But while some fighters unfairly game the system by dropping to a knee when they’re about to eat one in the face, it’s also currently allowable to simply put your hand down to escape a thrashing.

The worst recent example of this came during Rampage Jackson vs. Ryan Bader at UFC 144; click the image above and skip to the 4:58 mark. As you’ll see, Bader secures a clinch that places Rampage’s head in a very vulnerable spot. After Bader slams a knee up the middle, Jackson tags the mat with his left hand, effectively calling a time-out on getting his ass beat. With his options now limited, Bader decides to shoot for a single, and loses the position that could have — should have — ended the fight right then and there. That’s garbage, folks, and in my opinion, it’s the single biggest flaw in the unified rules. Two clarifications…

– Being on one knee should still count as a grounded safe-zone for fighters, but dropping there intentionally (as Jared described) should be treated as a violation of the current rule against timidity. It’s not a “wise” strategy, as Mike Goldberg claimed during the Rampage/Bader fight. It’s the very definition of “avoiding contact,” and referees should start giving warnings and point-deductions as soon as they see it happening.

– Upkicks should be allowed whether the recipient is technically grounded or not. The grounding rule is intended to prevent fighters from taking devastating head trauma from opponents who are on top of them, not to prevent amazing shit from happening.